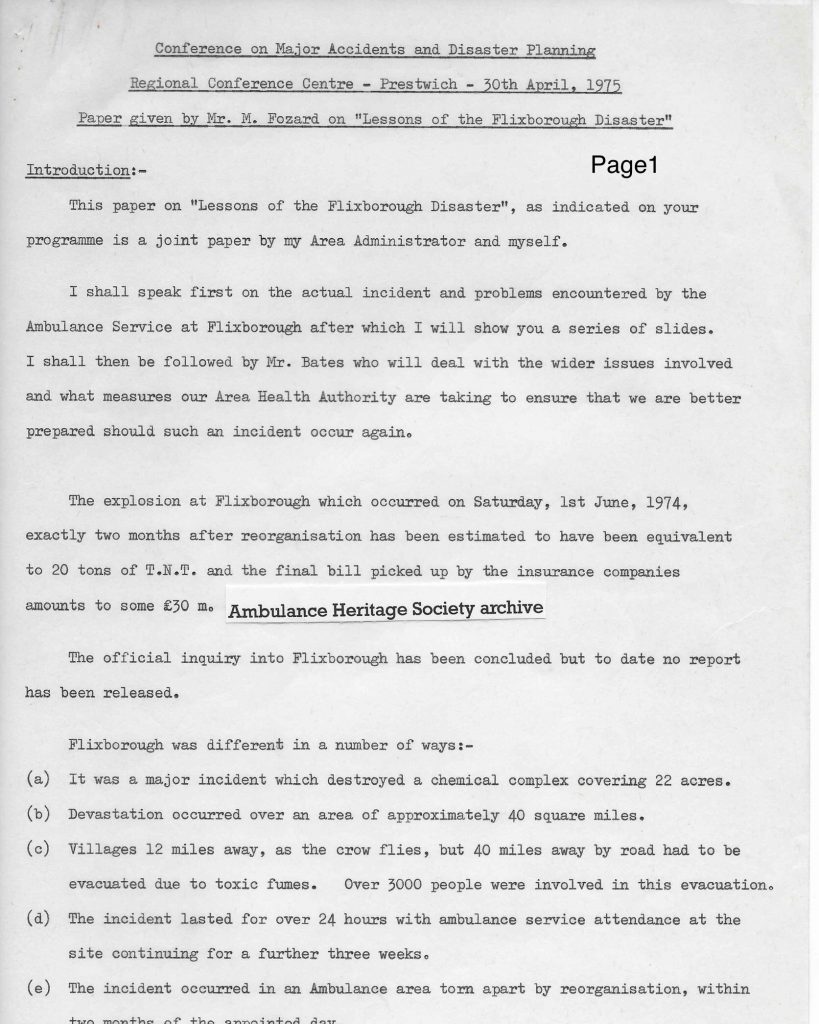 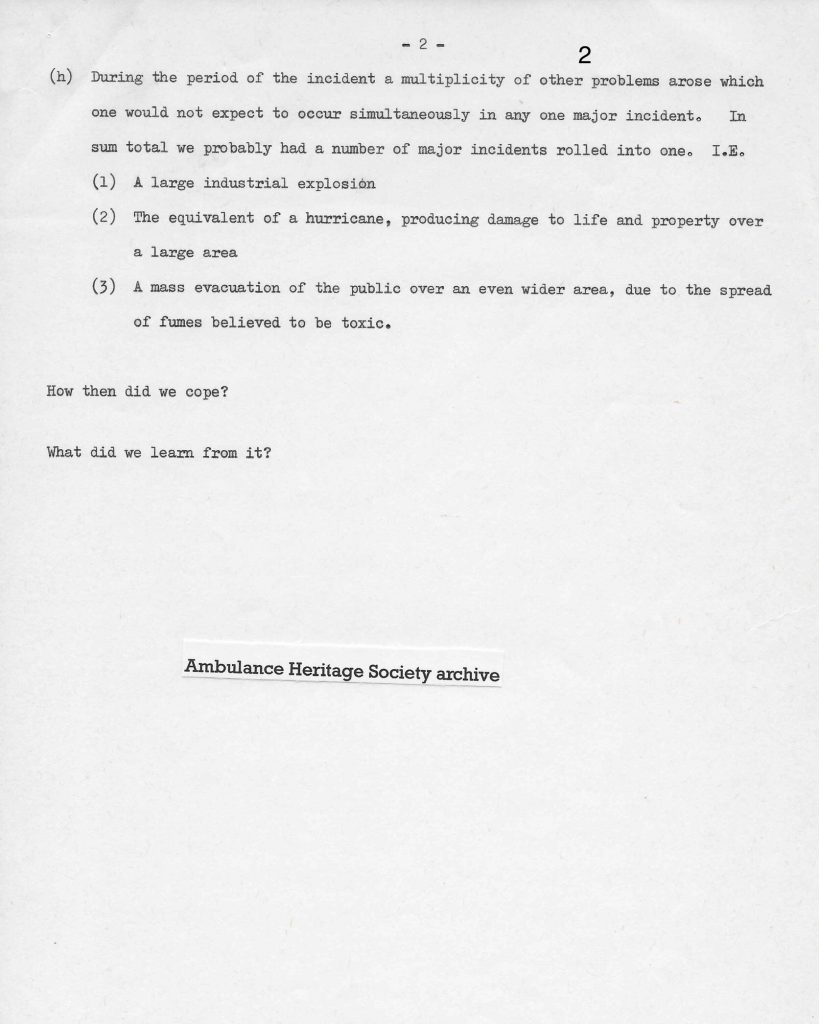 During a recent conversation on the 21st October 2016 with reference to Ambulance equipment a retired member of the Ambulance Service, relayed this very short but sad memory of 50 years ago “myself and two other drivers were on duty, when at about 11am the call came in for crews to go to the disaster site. So with the duty officer we loaded a motor with the emergency response kit. On the way we heard over the radio that Ross and Bromyard motors were also travelling.

We arrived about 1400hrs and directed to different rescue locations. We were stood down late the next day to return home, but not before being stopped at the top of the valley by a young Female Police Officer sobbing her heart out and asking why we were leaving the valley, we had to tell her that there was no patients alive to move to hospital, she collapsed into our arms. Behind closed doors in our Ambulance we all broke down and cried like never before, we later had a debrief and counselling, but to this day we never mentioned it at home or work again”

A Tribute to Gunny

Gunny is one of the AHS volunteers, in his car boot he can always find the item we are looking for:

Twice a week we gather, our vehicles to restore.
Gunny comes on Tuesday. Now who could ask for more?
Dressed in baggy overalls and a cap worn like a bonnet.
A battered old green gilet with EMAS written on it.
His hearing is exceptional, he does not miss a sound.
He’s a mighty pocket rocket who’s built close to the ground.
I’m going to tell a secret and will seek rewards.
I’m told he has a ladder for painting skirting boards.
When one of us is working and needs a tool to suit.
Gunny calls out loud and clear, “I’ve got one in my boot”.
He’s an artist with the fibre glass, no dents too big to fill.
He brought some paint from his car boot, it’s special stuff he whispered.
But when Jack sprayed some paint on it, the whole lot boiled and blistered.
No jobs too big. No task’s to hard he never tries to shirk.
He gives us frequent updates and makes us view his work.
I know that he will seek revenge, when this story has been told.
But I really do admire this man, who has a heart of gold.
So if you’re ever looking, for a tool or parachute.
Have a word with Gunny for he will have one in his boot.

As the NHS in 1948 began to merge Ambulance Services into local authority services, an audit was taken of available vehicles and where they originated from.  This copy of an original document stems from Nottinghamshire County Council take over of the Retford pre 1948 private ambulances. 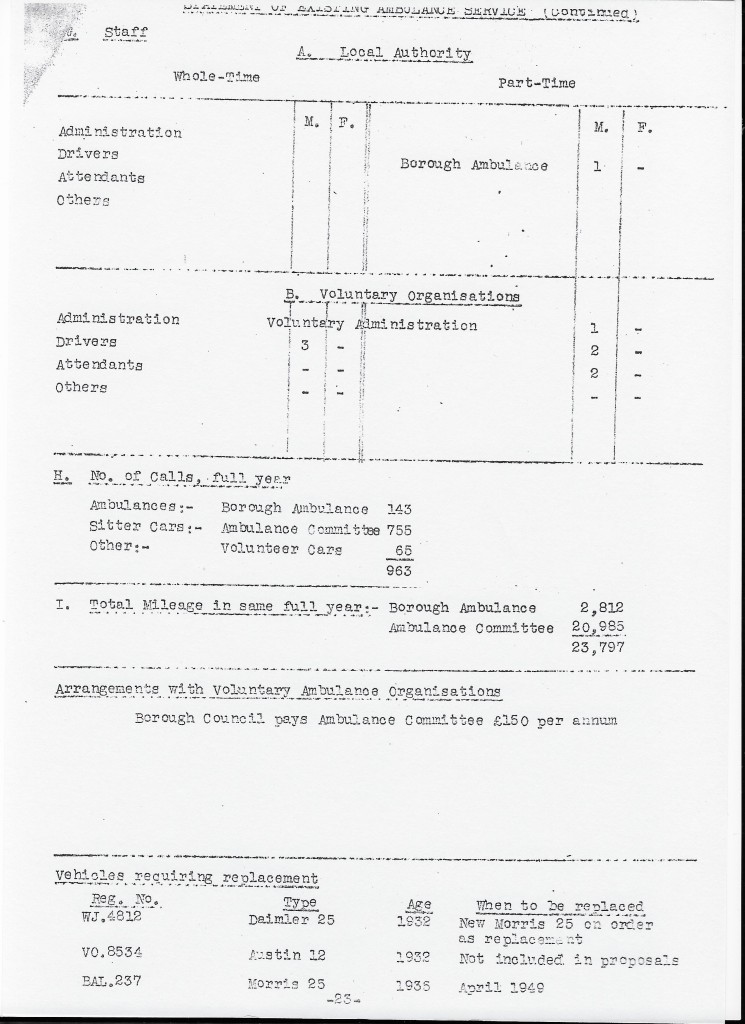 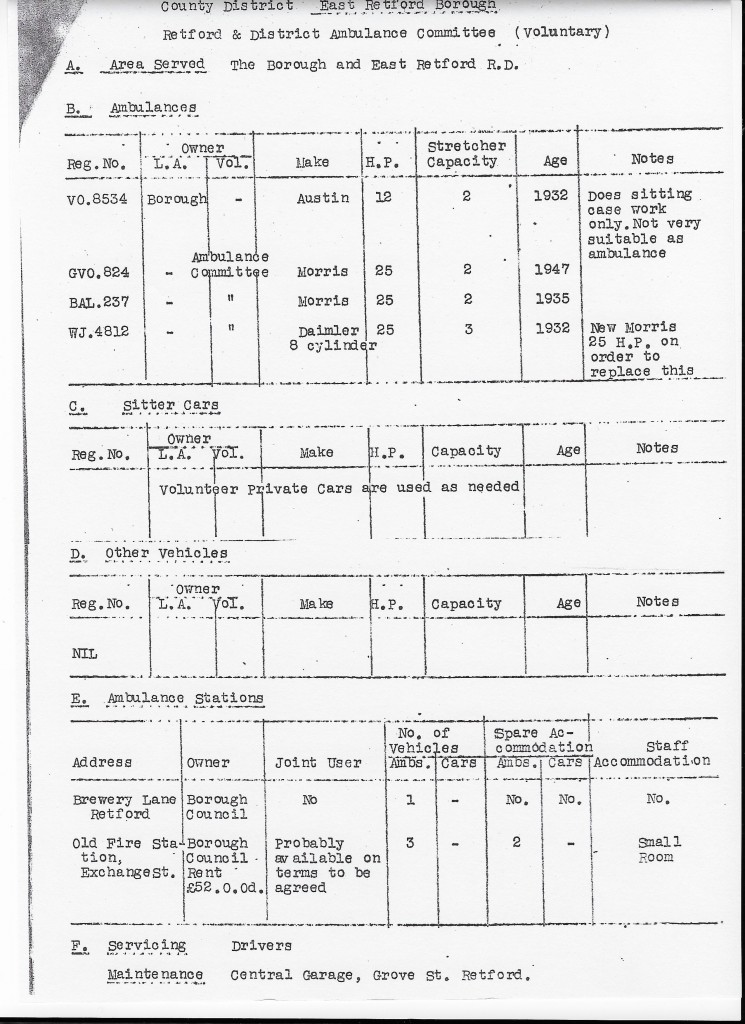 Our chairman and founder Jack C on what was thought to be a mercy mission at the 999 show. It turned out to be an emergency response to the 999 catering tent tea bar! 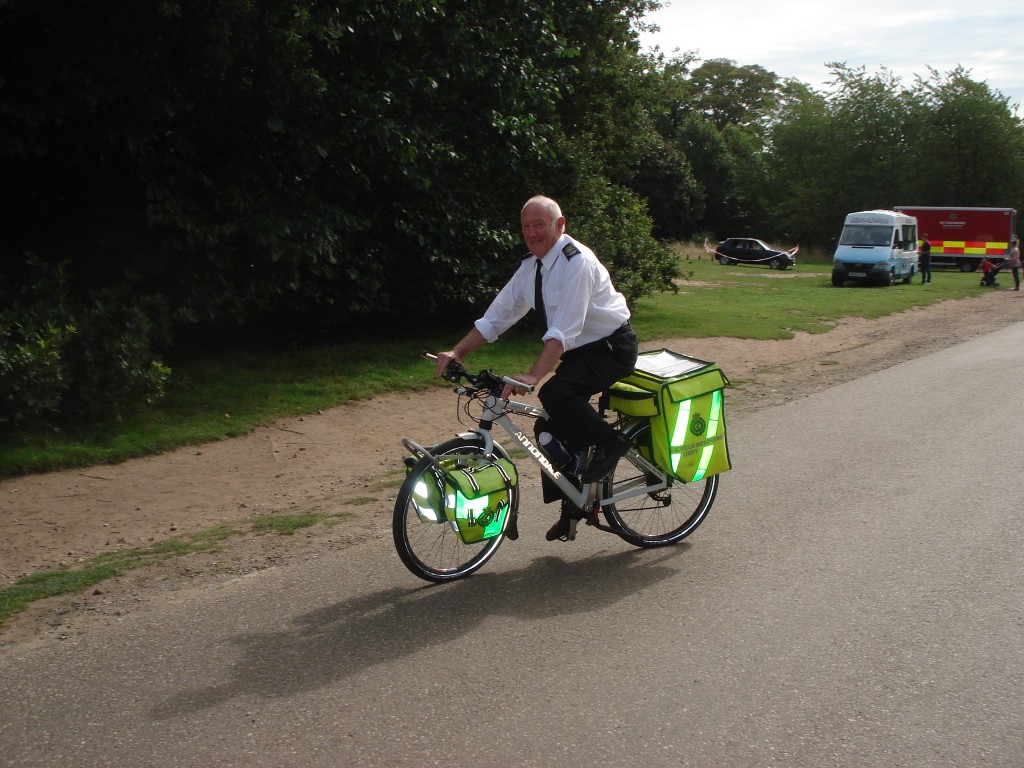 Ovine mischief at the barn today

Shauny the resident sheep, escaped from his field today and proceeded to head butt Chairman Jack (Captain Mainwaring) and our resident fire raiser Bob Street. Being an experienced shepherd, Bob proceeded to coax the rather large errant sheep back to his field armed only with words of encouragement and a plastic bucket to protect his nether regions, he succeeded in his task. However Shauny was about to exact his revenge. Whilst the group members were employed elsewhere Shauny once again escaped from his field and raided the refreshments area, and nicked all the biscuits after head butting the biscuit tin. He then retreated back to his field and rested in a shaded spot completely crackered.

Robin Concah joined the Notinghamshire Ambulance Service at Retford in 1968 and later transferred to Whitby Ambulance Station in North Yorkshire. Now retired he is living in Devon.

When I was a proud young man
Of success in this and that
An extra shift went begging
Taking children there and back.

I arrived at the base in Mansfield
And met the man who knew,
Not only where we were going
But how to be one of the few.

Bill drove to our first pick up,
Explaining my tasks for the day,
He cared about each of our charges
Knowing how, when and what to say.

He knew if a child had been fitting
Without any prompting from mum,
Bill joked with those downhearted,
While comforting those feeling numb.

We had children wearing helmets,
Held rigidly in their seats
One lay stiff and callipered
To sit, an impossible feat.

Bill drove that ambulance vehicle
As he might chauffeur the queen,
Myself in the company of heroes
Learned a lesson supreme.

In the queue for prestige and glamour
Not everyone there wins a prize,
But all of those children were loved
So they smiled and danced with their eyes.

For 40 hours 40 men in relays kept alive by artificial respiration a 31 year old member of a Rugby Football Club in Keswick, who had broken his neck.
The doctor attending said that to keep someone alive for 40 hours until his death was unique in the annals of medical history.  The team included members of the local St. John Ambulance [training of all Ambulance staff before the late 1960’s when Millar Training at Regional Ambulance Centres came into being was undertaken by St. John, Red Cross and St Andrews Ambulance] This edited article was provided by Malcolm Tomlinson a Director of AHS whose late relative Mr Postlethwaite was the subject of this rescue.

If you would like to make a donation to the Ambulance Heritage Society please use our Contact Page to get in touch.